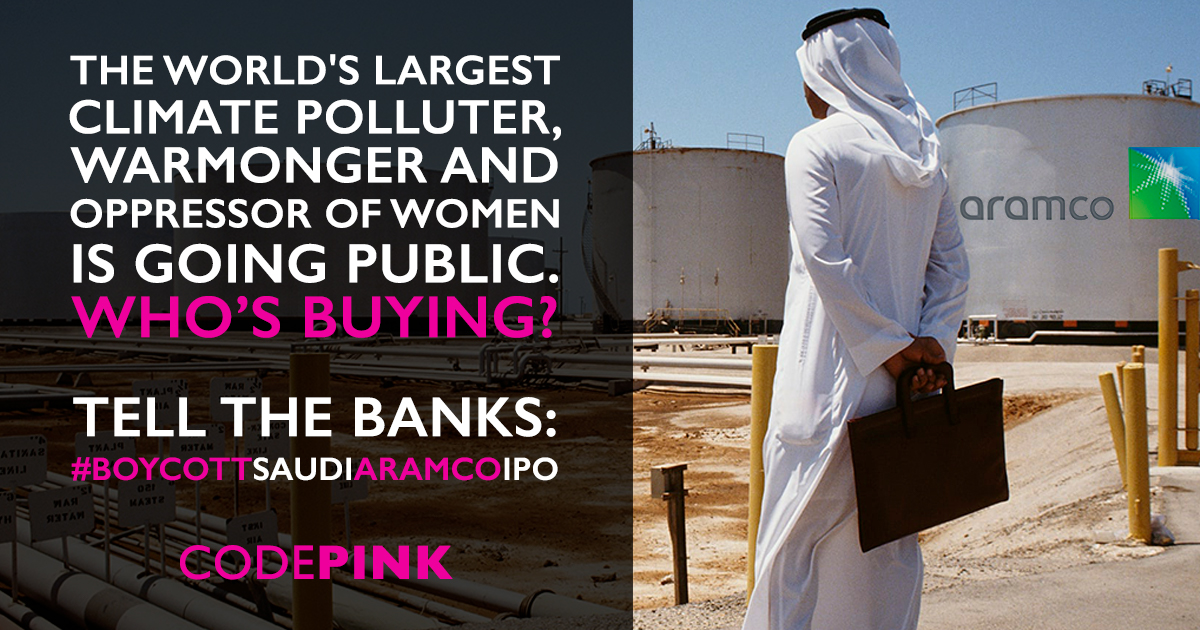 On Sunday November 3, 2019, Saudi Arabia announced that it it will be going forward with its first public share offering of its state-owned oil firm Saudi Aramco.

The prospectus is expected to be released on November 9 and shares should start trading on Saudi’s domestic stock exchange in December. Aramco, the world’s #1 climate polluting company, will likely offer 1-2 percent of its shares for sale, raising as much as $20-$40 billion in a nasty marriage of carbon and cash.

As people concerned with the planet and human life, we ask you to sever all involvement with Saudi Aramco and not purchase shares in the company.

A Human Rights Watch (HRW) report released on November 4, 2019 documents that Saudi Crown Prince Mohammed bin Salman (MbS) is anything but a reformer and has been carrying out some of the most brutal repression in the kingdom's history.

MbS’s promotion to de facto ruler in 2017 was followed by waves of political arrests starting with “prominent clerics, public intellectuals, academics and human rights activists” then “businesspeople and royal family members.” In May 2018, Saudi Arabia arrested 19 women’s rights activists who had campaigned successfully for the right to drive. A number of these women, including Loujan al-Hathloul, are still languishing in prison, enduring horrific torture and abuse, including electroshock, waterboarding, and sexual abuse.

MbS was also responsible for the grotesque murder of Washington Post journalist Jamal Khashoggi and has never been held accountable.

While arresting peaceful domestic critics is nothing new for Saudi Arabia, according to Human Rights Watch, MbS’s rule stands out due to the “sheer number and range of individuals targeted over a short period of time, as well as the introduction of new repressive practices not seen under the previous Saudi leadership.”

MbS is also responsible for dragging the kingdom into Yemen’s internal conflict, causing the world's worst humanitarian crisis. In Yemen today, the situation is so severe that every 10 minutes, a child dies from the effects of war and hunger. Saudi Arabia drops bombs on Yemeni school children, on Yemeni hospitals, marketplaces, residences—even on weddings and funerals.

Saudi Aramco is the world’s biggest climate polluter, having contributed 59 billion tons of CO2 since 1965, a third more than any other oil company. In October 2019, 10 environmental groups signed a joint letter asking you not to participate in Aramco’s Initial Public Offering (IPO). “This IPO will be a boost to a planet-wrecking company linked to a regime with a dubious human rights record,” said senior campaigner for Global Witness Adam McGibbon. Eleven thousand scientists in 153 countries have declared that the climate is in a state of emergency that will result in “untold human suffering” unless massive shifts occur in the way humans live. Given the climate crisis, Saudi Arabia’s war crimes in Yemen, and human rights abuses against women, journalists, dissidents, and others, it would be enormously reckless for you to invest in Saudi Aramco.

Please act responsibly by refusing to work with or purchase shares of Saudi Aramco.