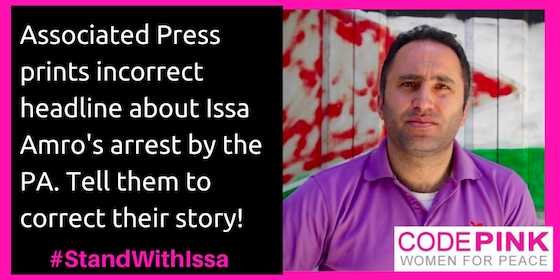 On Monday September 4, 2017 human rights defender Issa Amro was arrested by the Palestinian Authority for a Facebook post. Issa's post criticized the PA for their arrest of journalist Ayman Qawasmi and defended freedom of press as a fundamental right.

The Associated Press Jerusalem desk released a report of the story with an INCORRECT HEADLINE. It stated Issa had called for President Mahmoud Abbas to resign. Ayman Qawasmi, the journalist Issa had written about had stated Abbas should resign. Issa had not.

Call and tweet at the the Associated Press. Tell them their headline about Issa Amro's arrest is incorrect. Tell them to issue a correction.