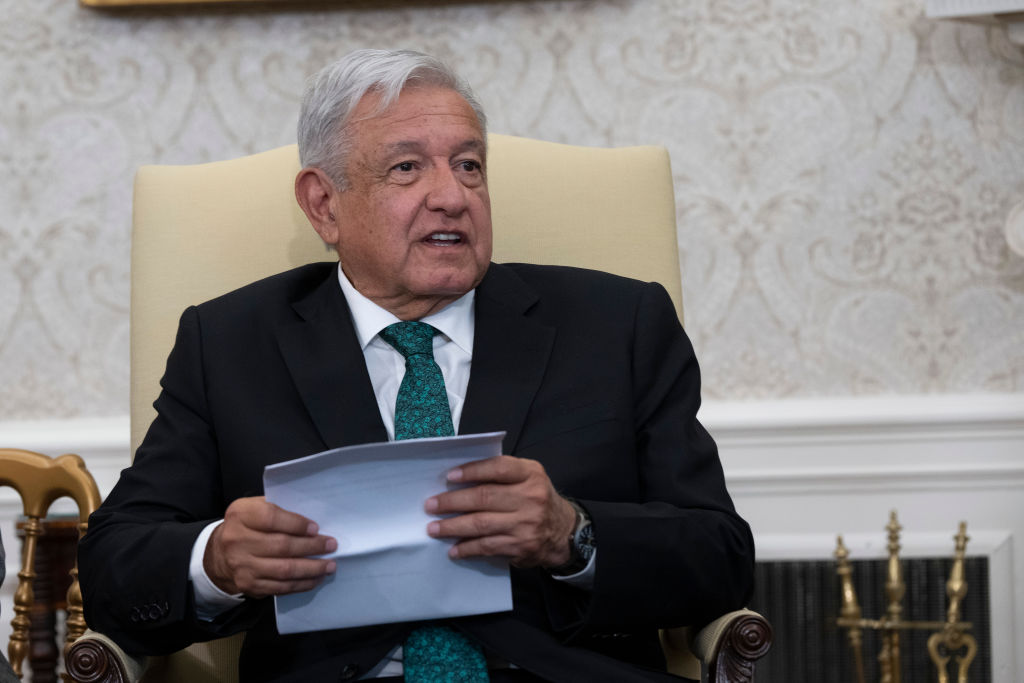 President Andrés Manuel López Obrador is wildly popular among Mexicans at home and abroad. It’s not just because of his domestic policies: AMLO is also playing a key role in challenging US dominance in Latin America.

When Mexican president Andrés Manuel López Obrador traveled to Washington, DC, on July 12, his most exciting encounter for Mexicans in both the United States and Mexico was not his meeting with President Joe Biden but his impromptu encounter with well-wishers outside his hotel room at the Lombardy. Some of them had driven from places like Chicago and New York City just to get a glimpse of their president.

The video of the encounter, which must have been a nightmare for the Secret Service protecting him, went viral. It showed the president (known by his initials AMLO) sticking his head out the window, blowing kisses, catching a bouquet of flowers thrown to him, and being serenaded by mariachis singing the song “Amigo” (“You are my soul brother, a friend that in every way and day is always with me”).

AMLO showered them with praise, thanking them for their sacrifice of coming to the United States and working hard in order to send money back to their families in Mexico. “You are heroes and heroines,” he said, with a huge grin. “Our economy is rising because of what you send to your relatives. You are exceptional migrants. I love you very much.” He shared with them his plans to meet with President Biden and push for immigration reforms so that they could come and go legally. The adoring crowd below shouted back, “We love you, president, we are with you.”

According to a poll released in early July, the dozens who gathered below the hotel window represent millions of Mexicans. It showed AMLO with a 66 percent approval rating, one of the highest of all world leaders. This despite the myriad problems that continue to plague the nation: inflation, corruption, violence.

AMLO has plenty of detractors. Critics from the Right condemn his populist economic policies, such as the nationalization of lithium. They say he has centralized power and does not tolerate dissent. On the Left, critics say he is complicit with repressive US immigration policies, has reneged on his promises to defend indigenous rights, and hasn’t done enough to stop the horrific wave of femicides and attacks on journalists.

But his fans see him as a man of the people who rode to power on December 1, 2018, with an overwhelming mandate to break with the corrupt parties that had ruled Mexico for almost a century. One of his first acts was to cut his own salary by half and slash the wages of most other top officials. He put the extravagant presidential plane up for sale, preferring to travel in economy class on commercial flights. He opened up the former presidential residence to the public, allowing millions of Mexicans and tourists to enjoy the palatial home and gardens.

Another reason for the president’s popularity is the extraordinary effort he puts into communicating with the public — perhaps more than any other leader in the world. From the day he took office, he has been holding marathon press conferences from Monday to Friday, starting at 7 AM and lasting for two or three hours. Called “La Mañanera,” the conferences are broadcast live on public television and streamed on a dedicated YouTube channel, as well as directly on the president’s official website. The president’s office estimates that an astounding ten million people watch the program.

Unlike scripted press events in the United States, these are free-flowing discussions where the president talks in a folksy style about everything from COVID-19, infrastructure projects, and the migrant crisis to Mexico’s best foods and the cheapest places to buy gasoline. He speaks in a slow, conversational tone, breaking down political jargon into digestible concepts and taking unscripted questions from the press.

Claiming that the mainstream media often misinform the public or ignore key issues, AMLO ironically uses these press conferences to bypass the media and take his message directly to the people. His open style represents a fundamental break with the past, where presidents went for years without taking an unvetted question from a reporter.

But AMLO is more than just a popular Mexican president; he has become a leading progressive figure in the Americas. He has garnered support and gratitude for bold actions he has taken in solidarity with beleaguered leftist leaders and nations. After the Organization of American States (OAS) sparked a coup against Evo Morales in 2019, AMLO sent a plane to whisk Morales out of the country and offer him asylum in Mexico. Morales credits AMLO with saving his life.

He has also offered asylum to jailed whistleblower Julian Assange and recently suggested that the Statue of Liberty should be dismantled and returned to France if Assange is extradited and imprisoned in the United States.

A close friend of Cuba, AMLO sent much-needed shipments of food, medicine, and fuel to the island during the height of the pandemic and announced in May 2022 that Mexico would hire more than five hundred Cuban doctors to help make up for a shortage of medical professionals in rural Mexico.

He has railed against the US sanctions on Cuba, calling them “depraved” and a key reason that Cubans are migrating. He said that the people of Cuba deserve a “dignity award” for resisting US interference for over sixty years and that the entire country should be declared a World Heritage site.

Mexico hosted dialogues between the Venezuelan government and that country’s opposition and resisted US pressure to recognize opposition leader Juan Guaidó as “interim president.”

AMLO’s hemispheric supporters also appreciate his recurring call for the Spanish king and the Catholic Church to apologize for the conquest of Latin America.

But AMLO’s position as a regional leader was really boosted by his refusal to attend President Biden’s June 2022 Summit of the Americas in Los Angeles because of the exclusion of Cuba, Nicaragua, and Venezuela. This had a snowball effect, prompting other heads of state to skip the gathering and turning Biden’s summit into a flop.

The Summit of the Americas is closely associated with the OAS, another institution AMLO has criticized, especially for its role in the Bolivian coup. AMLO has called for replacing the OAS with a truly autonomous body — “a lackey to no one.” That substitute would be the Community of Latin American and Caribbean States (CELAC).

CELAC has only existed for ten years and, unlike the OAS, it includes Cuba, Venezuela, and Nicaragua but not the United States and Canada. Its goal is to stimulate Latin American/Caribbean independence, integration, and autonomy. Mexico’s 2021 hosting of a CELAC Summit attended by almost all the leaders of the region gave the body a huge boost.

AMLO and some other Latin American leaders have taken this concept of Latin American integration a step further, calling for a sort of European Union with a single currency and the right to cross borders. It harkens back to the dream of Simón Bolívar to create a unified Latin America.

When it comes to relations with the United States, AMLO walks a fine line between railing against US policy toward Latin America and maintaining a positive relationship — even under Donald Trump. Mexico has no alternative, AMLO believes, because it shares a 2,000-mile border and there are, by Mexico’s government’s calculations, some 40 million Mexicans living in the United States. Even more than that, almost 80 percent of Mexican exports go to the United States.

But AMLO insists that the two-hundred-year US domination of Latin America has been exhausted and must come to an end.

“We are not a protectorate, a colony, or anyone’s backyard,” he declared in a groundbreaking July 2021 speech. “We say ‘adios’ to the impositions, interference, sanctions, exclusion, and blockades.” Instead, he called for a relationship based on nonintervention, self-determination, and the peaceful resolution of conflicts.

These ideas resonate across Latin America, especially with the new left tide sweeping the continent — the election of President Gustavo Petro in Colombia being the latest and most spectacular, given the country’s close alliance with the United States. If Lula wins in Brazil in the upcoming elections, the continent will be ripe for a new regional architecture and setting its own terms for its relations with the US. The continent will also be grasping for new models of development that don’t rely on extractivism and corporate profits but improving the quality of life and the environment. Millions across the hemisphere will look to their new leaders, as well as AMLO and CELAC, to help navigate that process.