All the news we hope to print! - War is SO over party in Times Square! 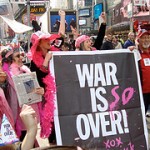 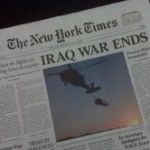 The Iraq War is SO over!!!! Time to celebrate!!!! We got the "news" this morning along with the rest of New York City (and Los Angeles, D.C., Chicago...) in a special edition of The New York Times today!!! Hundreds of people distributed them in New York Times black smocks in subways and on street corners to shocked passersby on their way to work. Check out this video all about it!

By noon, the news had spread like wildfire everywhere -- it's in Reuters, Huffington Post, Village Voice, Newsday, New York Post, The Washington Post's Swamp, Forbes, and more.  We had a party on Military Island in Times Square, with party hats, candy, banners and "War is so over!" stickers. A woman from Belgium, Irene Houben, flew in when she heard the news and joined us to celebrate (when the war began, she said, she called Pres. Bush and told him "From this day, God will no longer bless America!" and she's been protesting against it ever since.)  People were truly inspired and impressed with the paper. What an amazing day! Imagine the real thing....(Check out more photos of the action here!) 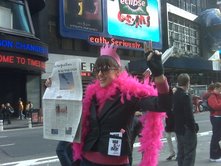 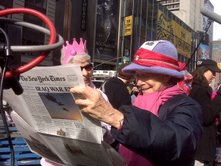