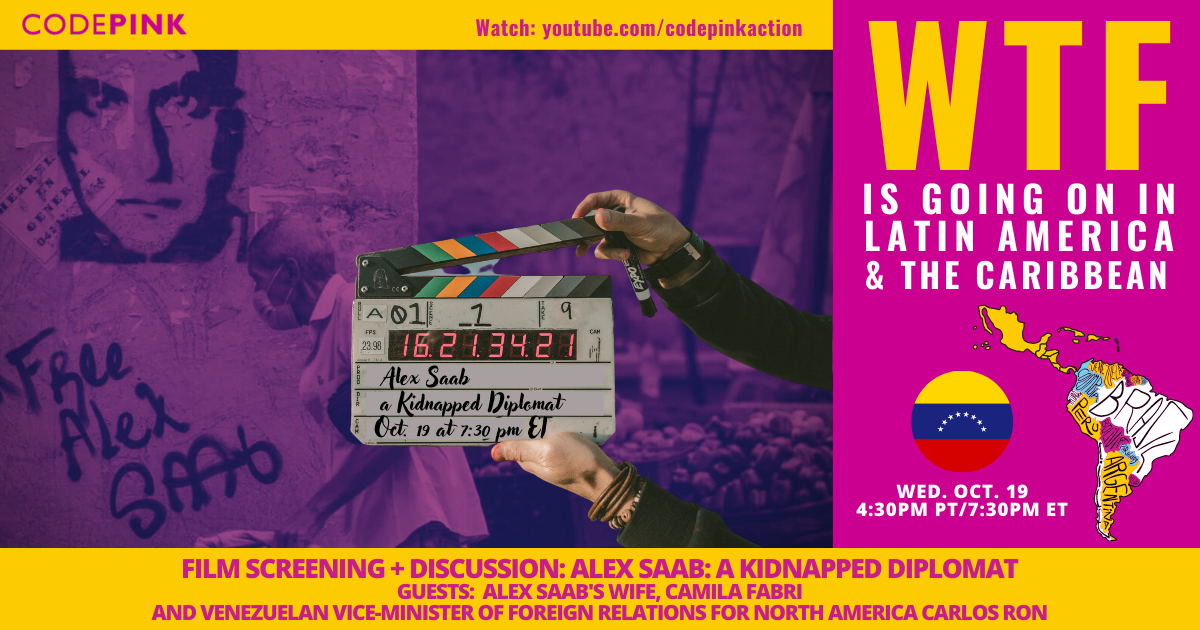 Join us for a special episode of WTF is Going on in Latin America and the Caribbean where we will have the screening and discussion of Alex Saab: a Kidnapped Diplomat.

Alex Saab is virtually unknown in the United States, where he is currently languishing in a Miami prison, but he has been vital to Venezuela’s ability to survive the brutal economic war being waged by the U.S. He is a political prisoner whose case has parallels to that of Julian Assange. Both have been subjected to extraterritorial reach by U.S. authorities, as neither are U.S. citizens, and their alleged crimes took place outside of the country. Assange is in jail for telling the truth. Saab is in jail for helping feed Venezuelans

The documentary Alex Saab, A Kidnapped Diplomat, directed by Venezuelan journalist and documentary filmmaker Karen Méndez, focuses on the illegal detention of Saab, first in Cape Verde and since October 2021 in the United States. Watch the trailer here and sign our petition urging the Department of Justice to drop the charges against Venezuelan diplomat Alex Saab!

Following the screening we will have a live Q & A with Alex Saab's wife Camila Fabri and with Venezuela's Vice-minister of Foreign Affairs for North America, Carlos Ron. Moderated by: Teri Mattson.

RSVP to receive your link to the community Zoom gathering, movie screening and Q & A session.

In partnership with Common Frontiers; Council on Hemispheric Affairs; Friends of Latin America IRTF - The InterReligious Task Force on Central America; Massachusetts Peace Action; and Task Force on the Americas, WTF is Going on in Latin America & the Caribbean broadcasts weekly on CODEPINK YouTube Live. You can also find us on Apple Podcasts, Spotify, Telegram and RadIndieMedia.com