Afghanistan: Will Obama Listen to the Women?

This article was originally posted on the Women's Media Center.

With the eighth anniversary of our invasion of Afghanistan nearing and a leaked letter from our general in Afghanistan that he wants another 40,000 troops before the funding for the last request of 21,000 has really been fully voted on, we felt it was time to go to Afghanistan and speak to the women. What do they want to say to President Obama? 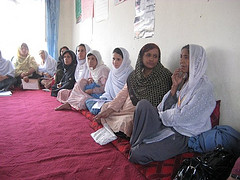 Nine of us arrived September 27 in the midst of an election scandal and reports of kidnapped Americans being held for a ransom of Taliban prisoners. A journalist, photographer, gynecologist, teacher, attorney, retired colonel and State Department member who opened the Afghan Embassy for the United States in 2001, we CODEPINK co-founders and our token male from a partner organization, Peace Action, made up our delegation. As the plane lowered through the clouds, we entered the dusty and broken city of Kabul. We wouldn’t take a clean breath until our return eight days later to Dubai. Rumor has it that more feces pollute the air of Kabul than anywhere in the world.

Women were to be our window into this broken world, but you cannot avoid the men. At our first meeting, the deputy director assigned to speak with us from Women to Women International was a man. In shock I asked why he had such a role, the woman who was program director for the last seven years smiling at the question. “Because so much of our work is too dangerous and can’t be done by a woman.”

Of course Nader, the deputy director, was needed in his role. Just to talk to the women they must first win over the Mullah, showing him how their work comes from the teachings of the Prophet. (The United States hasn’t been that smart in their communications with the Afghans.) At least Zainab and Sweeta, Nader’s bosses, have created an intelligent, highly functioning program that works. My western prejudices were constantly being uprooted.

I left the states with a judgment about some of the women who were members of the Parliament: So many are sisters and wives of warlords or tribal leaders chosen merely to fill the required quota of women. But Member of Parliament Shinkai Karokhal, a radical feminist from Kabul, reminded me that just their existence, that they constitute 25 percent of the body, is inspiring to women throughout the country. I told her she was right, it is a big step. We didn’t have such a thing in our country. She still managed to complain that it is a ceiling and not a floor: “Many of the women have received the majority vote for their election but were stuck in a quota slot.”
A Letter to President ObamaThe delegation that went to Afghanistan to sound out Afghan women on what they wanted from the United States returned with an open letter to President Obama:

Sending more military forces will only increase the violence and will do further harm to women and children. Instead, the funds should be redirected to improving the health, education and welfare of the Afghan people.

We encourage you to work quickly for a political solution in Afghanistan that will lead to a reconciliation process in which women will fully participate and a withdrawal of foreign military forces.
To add your name to this letter, click here.
One such woman is Dr. Roshanak Wardak, gynecologist and MP from the Province of Wardak. She didn’t want to be an MP, but her community came to her and begged. She had been there through the Tali (as she call them). She did nothing, spent nothing and yet was elected over 29 other candidates. She is about five feet tall and can talk for hours passionately, intelligently and forcefully without stopping, repeating herself or tiring.

“The women in the provinces are suffering. Obama sent 3,000 troops to Wardak for security, and daily there is bombardment, and deaths,” she told us. “They kill these boys I helped into the world.” She asked the military the other day about a boy and his father who were not connected to the Taliban. “Why did you kill them?” “Because they had relations with the Taliban.” “I have relations with Taliban daily, Tali are Afghans. I have to go to their weddings and funerals.” She told of a harvest, with peaceful farmers collecting potatoes, helping each other. They finish one plot and move to another. A rocket kills them. She asked the soldiers, the governor, the chief of police and none of them know why. They asked officials at the base in Kabul and are told they thought there was a rocket there. But it was a shovel. All these innocent farmers leave wives and children with no means of support.

Dr. Wardak said Obama sent soldiers to her province so they could vote, but those who went to vote were killed. “How is that protecting us?” she asked. “Take care of your people and keep them home and keep us safe. So if you want to ask me this, ‘should we send more troops or not?’ I want to ask you, with 84,000 American troops what did you do? Please compare 2009 with 2008, and compare 2008 with 2007, and 2007 with 2006. Year by year, the condition became more worse.

“With no troops our condition was much better and we were safe. The only ones suffering are the women.” Answering another question from an NGO she said, “spend the money on education for women, which is very necessary for peace.”

One afternoon we met with the women who led a protest against a law justifying marital rape that Karzai signed. These few hundred women and very few men demonstrated outside the Mosque of the Ayatollah who pushed through the law, and an angry mob poured out, screaming and throwing rocks. All these women were frightened for their lives and yet have not backed down. Some were never political before but are now creating new organizations to be stronger for the next fight.

All the women who speak out—from the MPs, to members of NGOs to those in the streets—fear for their lives, but it is not stopping them. The only women I met who told me they hadn’t received threats or felt afraid where five women journalists from the ROSE, a magazine for women on politics, culture and women’s lives. This is just weeks after they did an article about how much more women suffer from AIDS than men. Why aren’t they afraid? “We are just telling the truth, it is not political,” they told me.

When asked if they wanted more troops or the money invested in jobs, police training and infrastructure support most women choose the investment in their country. They know “military is not the answer,” which is a quote not just from them but from the director of the USAID office in Kabul. Everywhere we heard the recurrent theme, “Money for jobs, and make the Taliban obsolete with better alternatives.” And the recurrent question, “the United States is the power in this country, they pay for everything. Why can’t they do something about the corrupt government? Why can’t they hold these people responsible?”

In the last days of our trip, we joined a trialogue of women from India, Pakistan and Afghanistan discussing peace, which cannot occur without cooperation among their countries. We decided to offer a letter to Obama to bring him their voices. Members of Parliament, professors, NGO leaders, ex-ministers, and even the sister in law of Karzai signed the petition to Obama [see sidebar, “A Letter to President Obama”].

Won’t you join with them? It will take the women of the world to rise up and say militarism is not working. It will take the women of the world to force Obama and Congress to do the right thing and invest in the women instead. Militarism is a fire that is spreading across borders, and we need to find a new language. We need to meet not in rooms without windows but in the majesty of the mountains of this once beautiful country. Everyone has to be at the table. As the minister of women told us, “We have a mouth and a brain, we should talk.” Transparency, justice and real investment in the women of Afghanistan will bring peace and we need to start now.