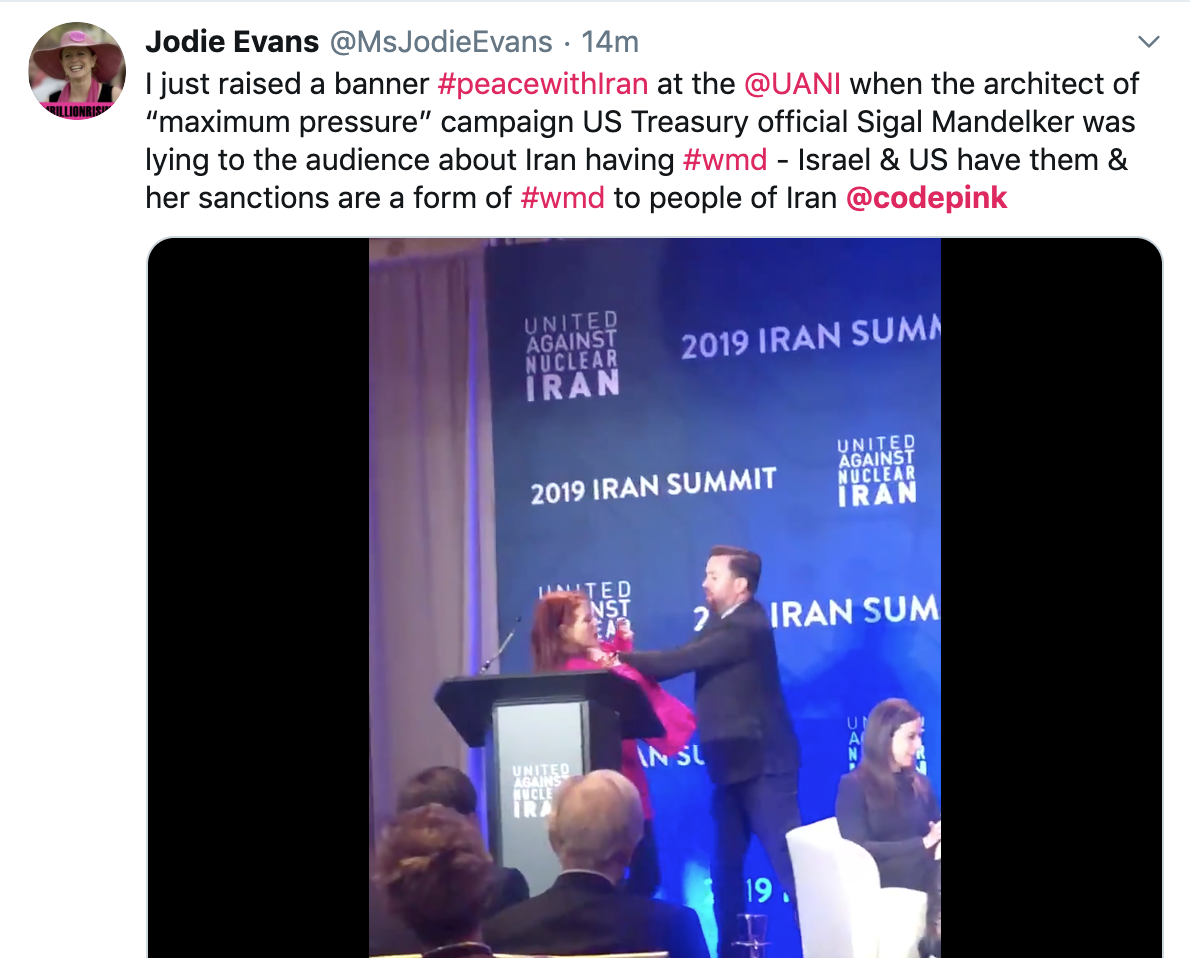 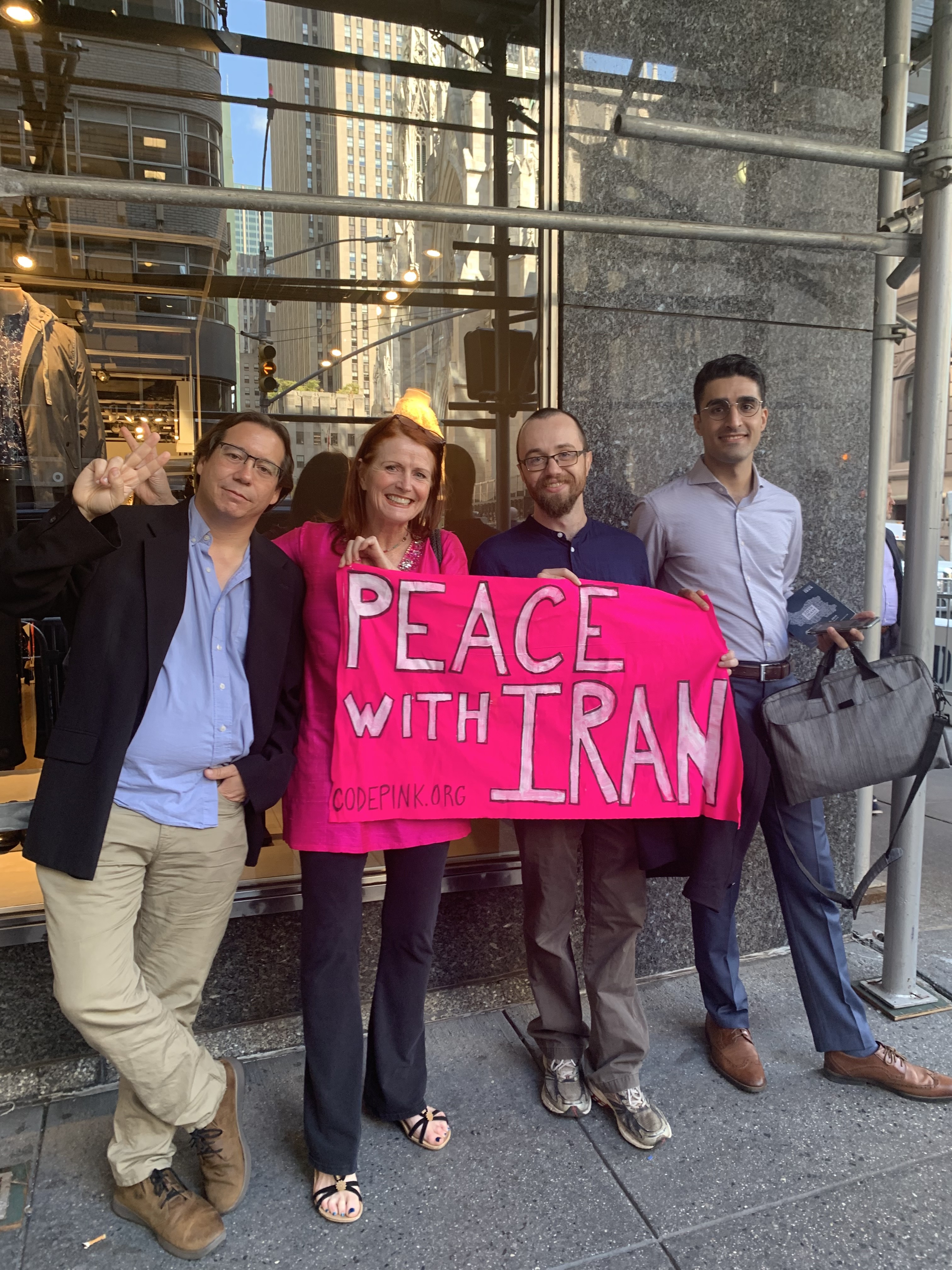 September 25, New York, NY— At the United Against a Nuclear Iran (UANI) summit taking place on the margins of this week’s United Nations meetings, anti-war activists disrupted numerous speakers today—including the Treasury Department’s Sigal Mandelker, who runs the Trump administration’s campaign of maximum pressure on Iran, and Israeli ambassador to the US Ron Dermer.

As Sigal Mandelker was speaking, Dylan Awalt-Conley of Democratic Socialists of America stood up and shouted,  “Sanctions are an act of war. You're preventing food and medicine from getting in.” Jodie Evans of CODEPINK walked up to the stage holding a large pink cloth banner reading “Peace with Iran.” “You are killing people in Iran; you're denying them medicine,” she said from the stage before being forcefully removed from the room.

Evans, citing the reasons she decided to protest Mandelker, said, “Sanctions as economic warfare are having a devastating effect on the Iranian people, preventing access to humanitarian supplies, including medicine,” said Evans. “Sigal Mandelker, as the Trump administration official who oversees and imposes the sanctions on Iran, is personally responsible for suffering and death happening right now because of the sanctions. The provocations she is in charge of could easily, either intentionally or by mistake, lead to an all-out war. The US already has the blood of hundreds of thousands of Iraqis and thousands of American soldiers on its hands and now the Trump administration is picking a fight that could even more devastating than the Iraq war.”

UANI is a right-wing organization that has been lobbying against the Iran nuclear deal and has ties with the extremist group MEK, which was on the US terrorist list until 2012. Representatives of the MEK, a group hated inside Iran, were invited to this UANI conference.

On Monday, the Trump administration announced the deployment of 200 US troops to Saudi Arabia and new sanctions, including on the Central Bank of Iran. Iranians were already suffering from the brutal sanctions even before the announcement of the additional sanctions on Monday. Trump bragged that the new sanctions would be the “highest sanctions ever imposed on a country,” and that the penalties would go “right to the top” of the Iranian government. But what the sanctions really hit are medicines and other humanitarian supplies. This is because it is the Central Bank of Iran that allocates the nation’s limited foreign reserves to Iranian banks involved in humanitarian trade. Without this, Iranian importers don’t have the currency to pay for humanitarian goods.

Though Trump and Pompeo—who also spoke at the UANFI summit today—are the public faces of the US’s “maximum pressure” campaign Iran, it’s Mandelker who pulls the actual levers of the sanctions. In 2008, while Mandelker served in Bush’s Department of Justice, she approved the notorious deal that allowed the wealthy child sex trafficker Jeffrey Epstein to escape federal prosecution.

While Israeli ambassador to the US Ron Dermer spoke, activist Ben Zinevich walked onto the stage with a sign reading “Peace with Iran.” Israel opposed the Iran deal in 2015, campaigned for the US to leave the deal, and has for many years been pushing for the US to go to war with Iran. Demer during his talk said Iran is selling weapons to terrorists rather than feeding their people, admitting that the sanctions are not about nuclear weapons but Iran being able to sell its oil.

“The Israeli government's constant war baiting in the region has only aided the US in warping policy away from true peace in the region, said Ben Zinevich. Supported by the US and Gulf states, Israel seeks the upheaval of Iran as it stands in direct defiance of US-Israeli imperialism in the region. As everyday Iranians wish, we must call for an end to sanctions, and a dialogue of peace going forward.”

Pauline Salotti of CODEPINK also disrupted Dermer. She stood up while Dermer was speaking and said: “sanctions kill innocent people! You should stop killing people! Who are we kidding here? This is not about Nuclear, it’s about dropping the US dollar! It happened to every country before. What happened to Syria, what happened to Iraq? let’s not kid ourselves.”

Anti-war protestors also held a protest on the sidewalk outside of the event. The groups involved in the disruption and protest included CODEPINK, World Can’t Wait, Peace Action NY, War Resister League, and Brooklyn for Peace.