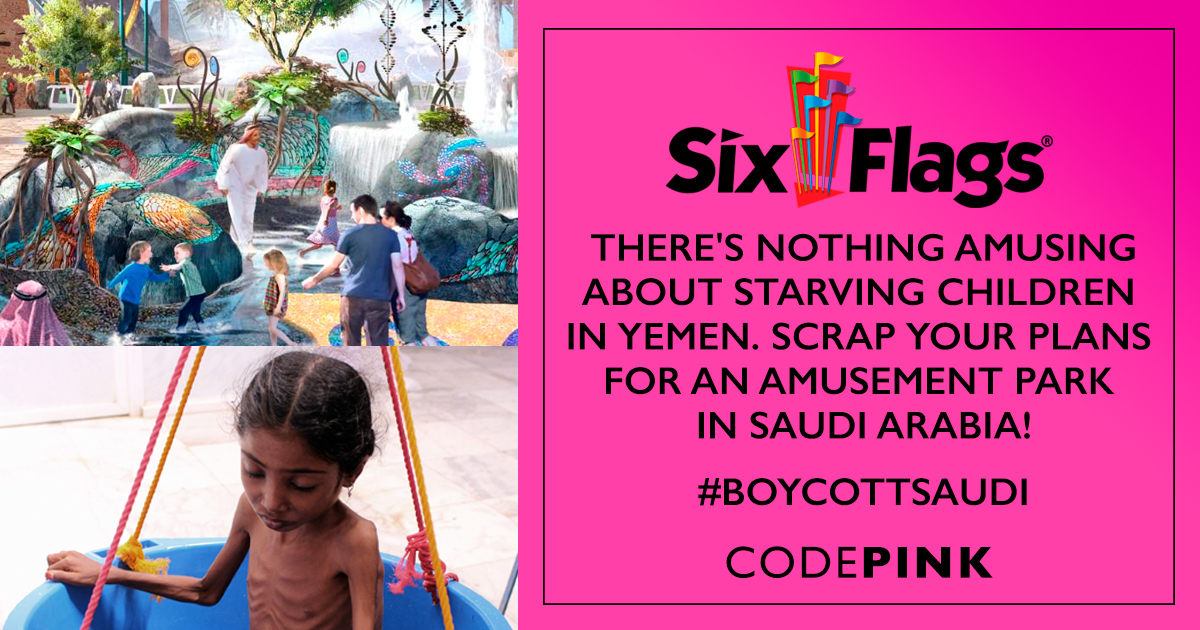 Six Flags, a US company that is the world’s largest theme park operator, is planning to open an amusement park in the Saudi Arabia city of Qiddiya in 2023. The park is slated to have 12 record-breaking rides and activities, including the longest, tallest, fastest roller coaster in the world. Meanwhile, Yemeni children are dying of starvation as a result of the brutal Saudi-led war. Opening a Six Flags amusement park in Saudi Arabia will provide the repressive bloody kingdom with cover, helping whitewash its crimes against Yemeni children and Saudi women, journalists, dissidents, and human rights defenders.

Sign our petition to Six Flags Entertainment Corporation urging them to scrap their plans for an amusement park in Saudi Arabia.

Out of concern for children in Yemen suffering from malnutrition and out of concern for the Saudi women, journalists, dissidents, and minorities, we ask you not to go forward with your plans to open a Six Flags theme park in the Saudi Arabian city of Qiddiya.

Since 2015 Saudi Arabia has been carrying out a war in Yemen so brutal that Yemen is now suffering the worst humanitarian crisis on earth. Since 2015 some 85,000 children under the age of five have died from acute malnutrition as a result of the war; that’s one child every 10 minutes. In 2018, a Saudi bomb hit a school bus of Yemeni children going on a field trip. Forty-four young children were killed, their blood-covered backpacks strewn across the area.

Saudi Arabia is the world’s most misogynist, gender-segregated nation. Although Saudi Arabia recently abolished part of their male guardianship system, women still need the permission of a male guardian to marry or divorce and are separated from men in schools, restaurants and public buildings. In family issues such as child custody, child support, and divorce laws, Saudi courts favor men over women and women can easily lose access to their own children when they separate from their husbands. Additionally, Saudi Arabia is one of the only Arab countries that does not have laws setting a minimum age for marriage. Child brides are still acceptable, especially among poor, rural families where girls may be married off to richer, older men.

Saudi Arabia chops off people’s heads in public executions for offences ranging from atheism to homosexuality to sorcery. Saudi Arabia has one of the highest execution rates in the world. It also uses long prison terms and physical punishment against everyone from bloggers to lawyers who dare question the regime’s absolute power.

While your Six Flags amusement park in Qiddiya will provide Saudi Arabia with six themed lands of play and fantasy and the longest, tallest, fastest roller coaster in the world, the reality of Saudi Arabia is one of war, misogyny, torture, beheadings, and repression of peaceful dissent. Please take action against this whitewashing and stand in solidarity with those affected by Saudi crimes by scraping your plans to open a theme park in Saudi Arabia.