As we divest from the war economy, we will continue to be strategic in sparking the transition to a Local Peace Economy. We don’t know what 2019 will bring, but with your help, we’ll be prepared for anything with our signature passion, playfulness and power. Won’t you help us make 2019 the year that we the people turn the tides toward peace? Your support will help us continue to speak truth to power, raise awareness, build community, and ignite change. We thank you for your generosity, your commitment, your voice and your vision.

Thanks to your generosity, 2018 has been an incredibly effective year at CODEPINK! As we gear up for 2019, scroll down to look back at some of our most exciting work in 2018... 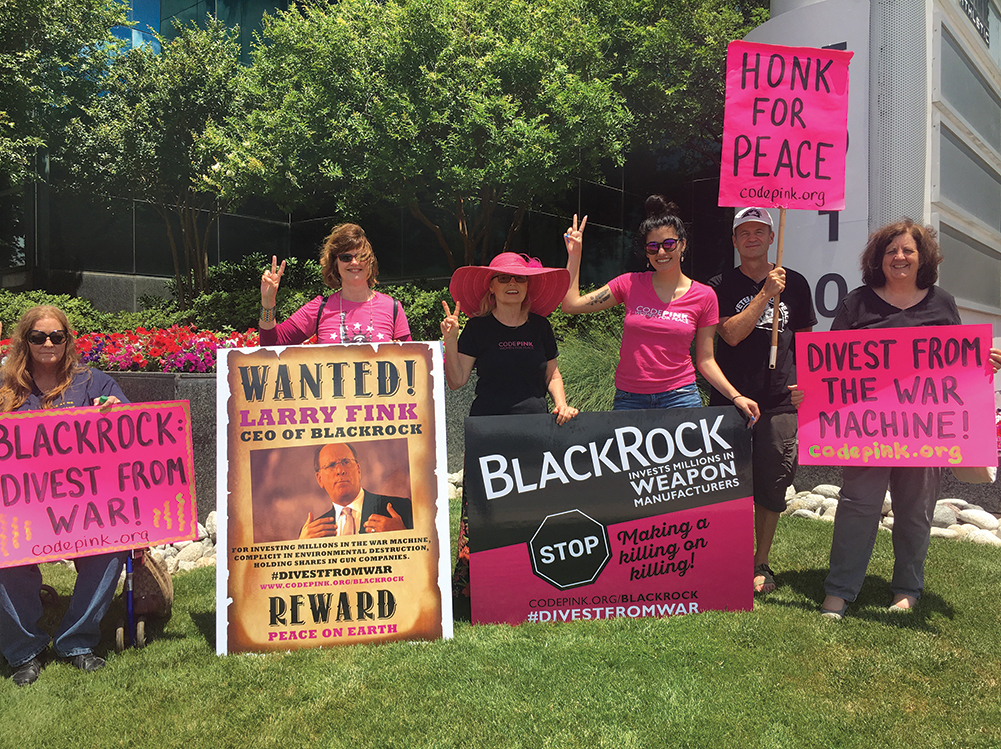 We’ve developed tools to make it easier to divest from the war economy. We are proud of our groundbreaking work to get to the root of the military-industrial complex—the war profiteers. The Weapons Free Fund launched with As You Sow has become the “go to” source for information for cities, pension funds, and institutional investors to become “violence free.” The free database covers 3,000 U.S. mutual funds, and details how much of the fund’s assets are invested in weapons companies. It also provides information on funds without investments in the weapons industry. It’s a fantastic resource for the peace movement!

We are working with cities and students across the US, including Cal Poly SLO and CUNY, to divest from the war machine. We are calling on members of Congress to stop taking campaign funding from weapons companies so they can represent their constituents, not corporations making a killing on killing! We are pushing the largest investment firm, BlackRock, to divest billions of dollars it has in weapons manufacturers. We’ve delivered thousands of petitions and postcards to offices across the country, disrupted CEO Larry Fink at the Yahoo! Summit in NYC and pushed the International Rescue Committee to withdraw the humanitarian award they gave to Fink. We continue to work with shareholders to influence change at the next annual BlackRock meeting and support community banks to divest their BlackRock shares.

The flip side of our Divest from War campaign is building a Local Peace Economy. We have been hosting parties and community gatherings, highlighting inspirational projects and daily offerings, and collecting interviews that will become a book next year. We hired a new Peace Economy Organizer, Kelli Curry, who has a background in food, farming, justice and equity. She is supporting the growth of the Local Peace Economy by engaging in critical dialogue on how to move away from an old school war economy. 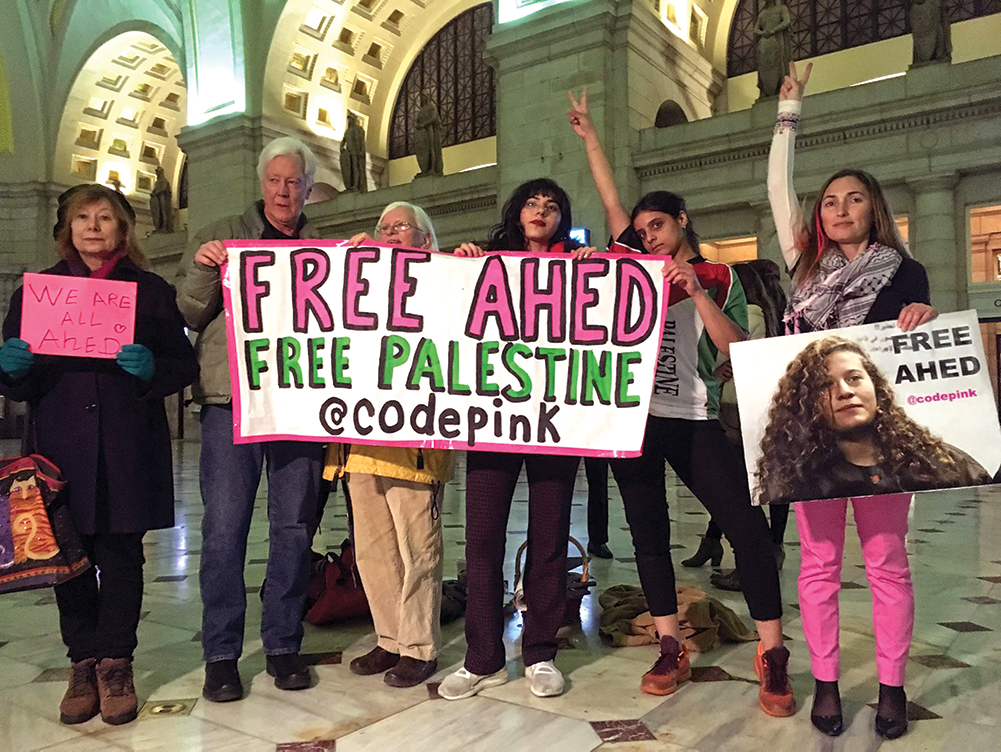 2018 was a busy year campaigning for Palestinian rights.

We started the year protesting for imprisoned Palestinian teenager Ahed Tamimi. After Israel announced that CODEPINK would be banned from entering, Medea and Jodie flew in to support the Tamimi family. When Ariel tried to enter in July, her visa was revoked and she was promptly deported. We took Israel’s accusation that Ariel is an extreme boycott activist to heart and launched a new campaign targeting Israel’s largest weapons company, Elbit Systems. Elbit uses drones and other weapons on civilians in Gaza and provides surveillance systems for Israel’s apartheid wall and the U.S.-Mexico border. We are mobilizing to boycott and divest from this weapons giant that profits off of violence and repression from Palestine to Mexico.

We spent part of the summer with the Gaza Freedom Flotilla. They traveled from port to port across Europe—educating people about the horrendous conditions in Gaza, collecting medical supplies and helping get the flotilla passengers released from Israeli prisons after the boats were hijacked by Israeli forces in international waters. 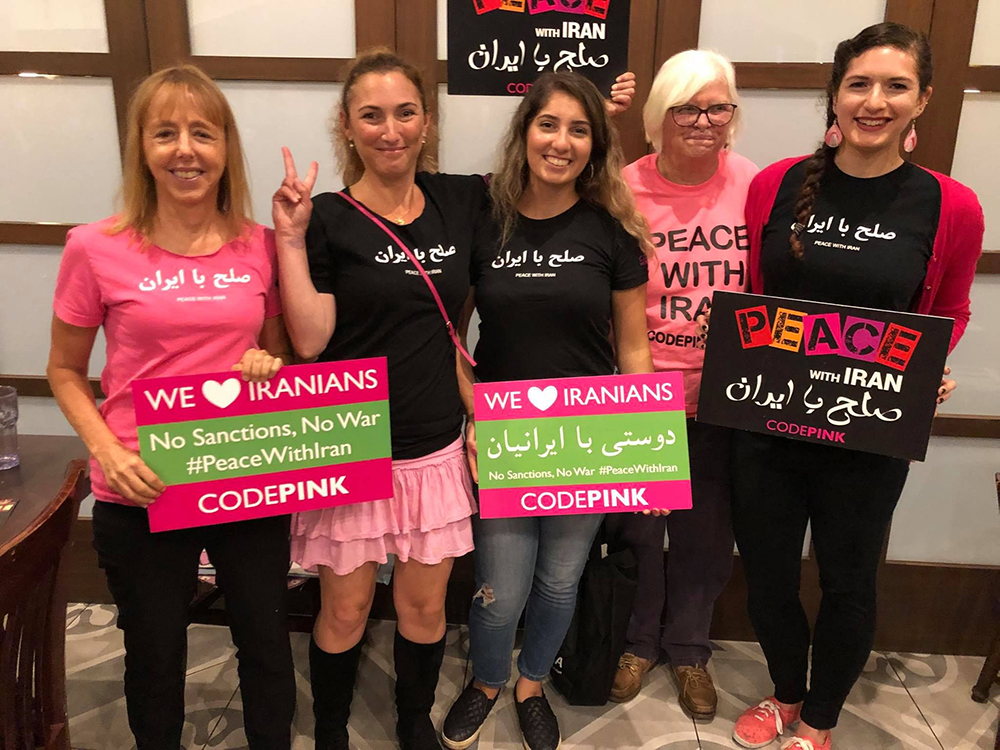 No sanctions, no war with Iran! When President Trump withdrew from the Iran nuclear agreement, we moved into gear. Co-founder Medea Benjamin traveled across the country with her book, Inside Iran, educating audiences about the urgency to stop another war. We hired Iranian-American organizer, Lily Tajaddini, to organize a Summit for Peace with Iran to expose the devastating effect of sanctions on Iranians and to urge members of Congress to oppose Trump’s belligerent policies. New York coordinator Sarah Manasrah brought our peace message to Secretary of State Pompeo’s speech against Iran and Medea’s intervention after a speech by the administration’s Iran envoy Brian Hook went viral, boosting our campaign enormously. We have organized a peace delegation to Iran in January to show Iranians—and Donald Trump—we want peace. 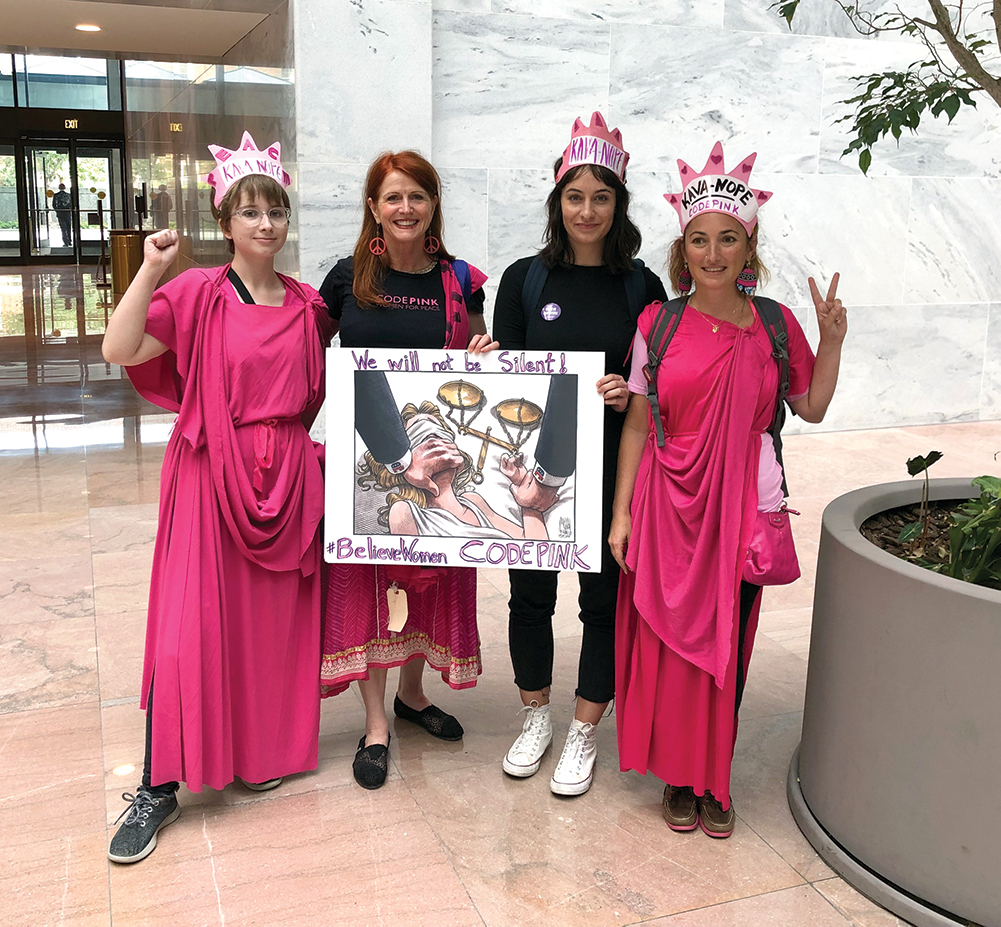 We spent September supporting women’s rights at home by protesting the Supreme Court nomination of Brett Kavanaugh. Ariel’s arrest made the front page of the New York Times and other CODEPINKers, including Tighe and Shawn Barry and our intern Caroline, were among hundreds arrested. Ariel and Medea appeared on Fox News to speak out against all violence. Although we weren’t able to keep Kavanaugh off the Supreme Court, our collective efforts took the #MeToo movement to a new level and energized women and survivors. 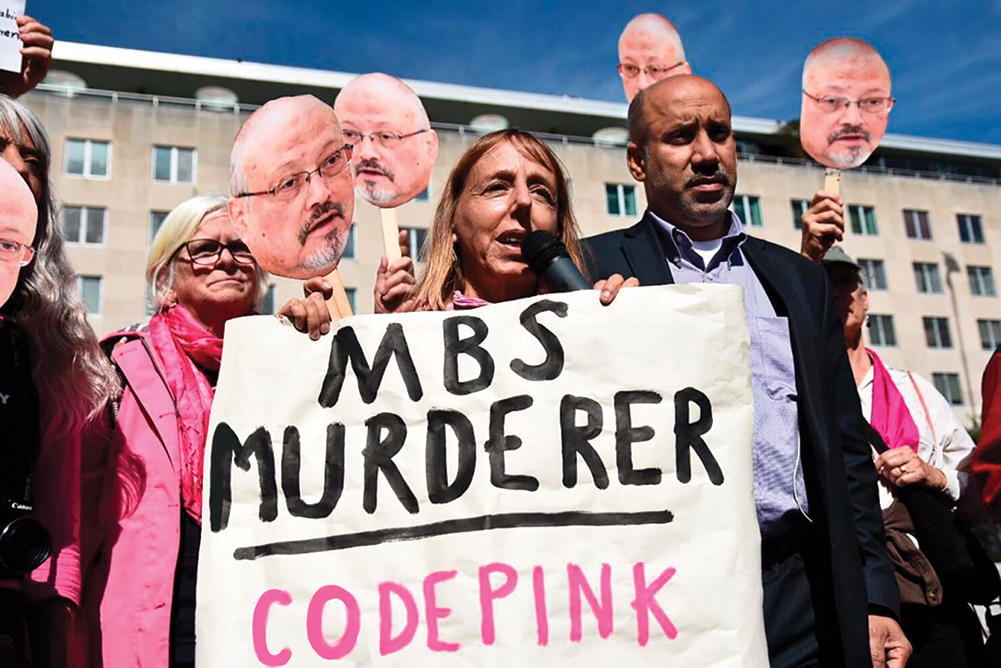 Our voices have been at the forefront, calling for an end to US participation in the war on Yemen, and breaking ties with the Saudi regime. We have continued protesting war in Yemen and have inched closer to finally winning a vote in Congress to stop selling weapons to the Saudis. We are determined to win that vote. We were outside of the Saudi Embassy with 40 backpacks representing the 40 children killed when Saudi forces bombed a school bus. When the Crown Prince was feted by American elites during his visit, CODEPINK demonstrated nationwide warning folks that this prince was no Prince Charming! After the gruesome murder of Washington Post journalist Jamal Khashoggi, we protested, launched one campaign to pressure companies and officials from attending the Future Investment Forum in Riyadh and launched another demanding PR firms employed by the Saudi government to cancel their contracts. We have been saying it all along: The US should not be in a cozy alliance with this murderous regime.

We witnessed and celebrated the historic peace talks in Korea. After our last trip to North and South Korea with WomenCrossDMZ, we participated in another peace delegation with 30 women from 15 countries. We held a peace symposium at the National Assembly and did a peace walk to the DMZ (the demilitarized zone). We were reminded that peace in Korea is possible through the Korean people and their leaders, who we support by organizing with, writing articles and advocating against the war.

Nancy Mancias traveled to Greece to support migrants and refugees living in the Kara Tepe camp on the Greek island of Lesbos. She delivered donations of baby shoes and clothes. She will soon return to deliver other necessities like briefs and hygiene products. Stateside, CODEPINKers joined a delegation at the Texas/Mexico border opposing family separation and participated in a number of anti-ICE protests around the country. 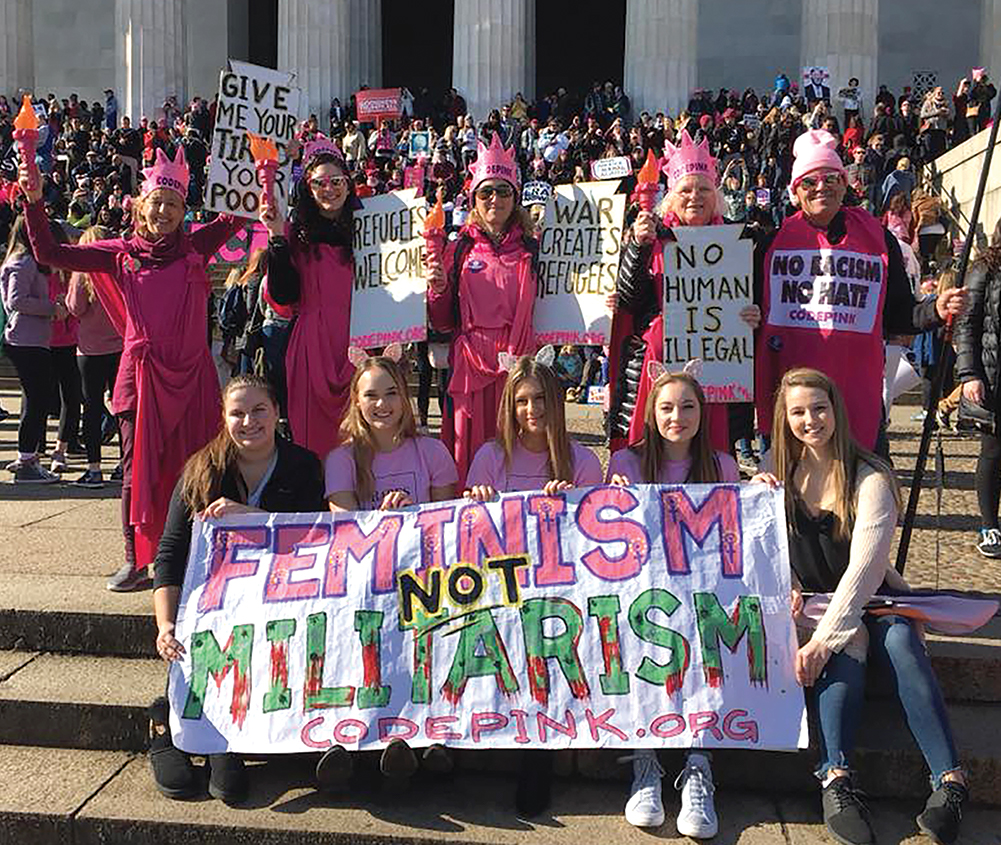 With Free Speech TV, we produced and hosted a Town Hall on Militarism, with an introduction by Congressman Ro Khanna. We’ve hosted webinars on issues from Korea to Yemen to Afghanistan. We protested the confirmations of Mike Pompeo as Secretary of State, John Bolton as National Security Advisor and Gina Haspel as Director of the CIA. We continued our drone resistance at Creech Air Force Base in Nevada, went to Florida to work with students after the Parkland shooting, and joined them in DC for March for Our Lives. We accompanied Reverend Barber at the Poor People’s campaign to address the racism, poverty, militarism and climate chaos of our nation. Twenty activists traveled to Barcelona to learn how progressive political forces are building an innovative local peace economy. We participated in the World Beyond War conference in Canada, joined anti-NATO gatherings in Europe and took a delegation to Cuba to learn how Trump’s reversal in diplomatic relations is affecting Cuban people.

See you in the streets next year!