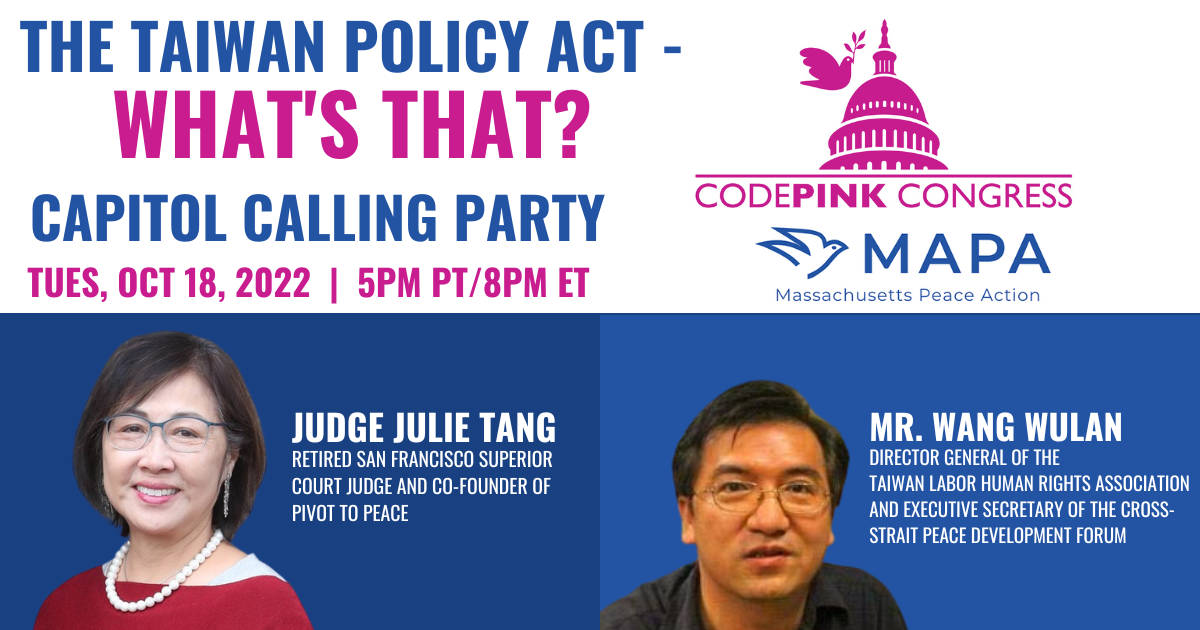 On Tuesday, October 18, join CODEPINK Congress and Massachusetts Peace Action in conversation with Judge Julie Tang about the Taiwan Policy Act and its accompanying risks of escalating US-China tensions.

Long before Russia invaded Ukraine, the US funneled weapons to Ukraine to escalate tension with Russia. Now, Congress is about to repeat the same scenario with Taiwan.The Taiwan Policy Act risks further inflaming US-China relations by funneling $6.5 billion in weapons and military training to Taiwan to prepare for war with China. The bill, which cleared the Senate Foreign Relations Committee, would recognize Taiwan diplomatically as a nation, not a breakaway province of China, thus undermining the US's one-China policy.

Sound like another proxy war in the making? You bet, but it's not a done deal yet. The White House may not sign the bill, IF it passes --and that's a big if, so let's mobilize to defeat this bill.

Judge Julie Tang is a retired San Francisco Superior Court judge and co-founder of Pivot to Peace (US) coalition for world peace between the US and China, and she has been a guest on CODEPINK's China is Not our Enemy (CINOE) campaign's webinar. In August, Tang was a featured speaker at a San Francisco rally to protest House Speaker Nancy Pelosi's (D-SF) anticipated trip to Taiwan, calling Pelosi's trip "reckless and unreasonable" with "no apparent usefulness or benefit to Americans or the world." In 2017, Tang helped co-found the Comfort Women" Justice Coalition that build the Comfort Women Memorial in remembrance of the girls and women sexually enslaved by the imperial Japanese Army.